Create an interface around the graph

Written by Pierre Lacombe
Updated over a week ago

Go to Main Menu (blue button with the title of your project at the top left of the creation interface), then click on Menus. 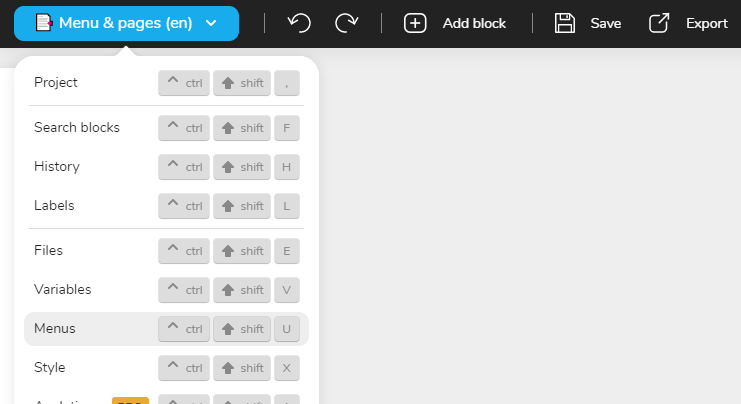 If your project does not have one, you will be offered to create your menu. 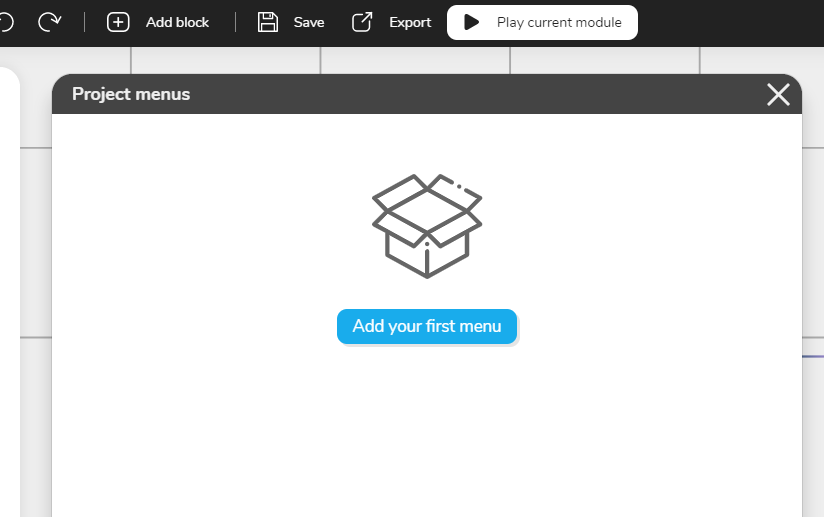 A menu is a fixed screen in your application that displays different items that you can arrange in any order and position you want. On the right you can see a live preview of the menu and choose the preview ratio in the top right corner. 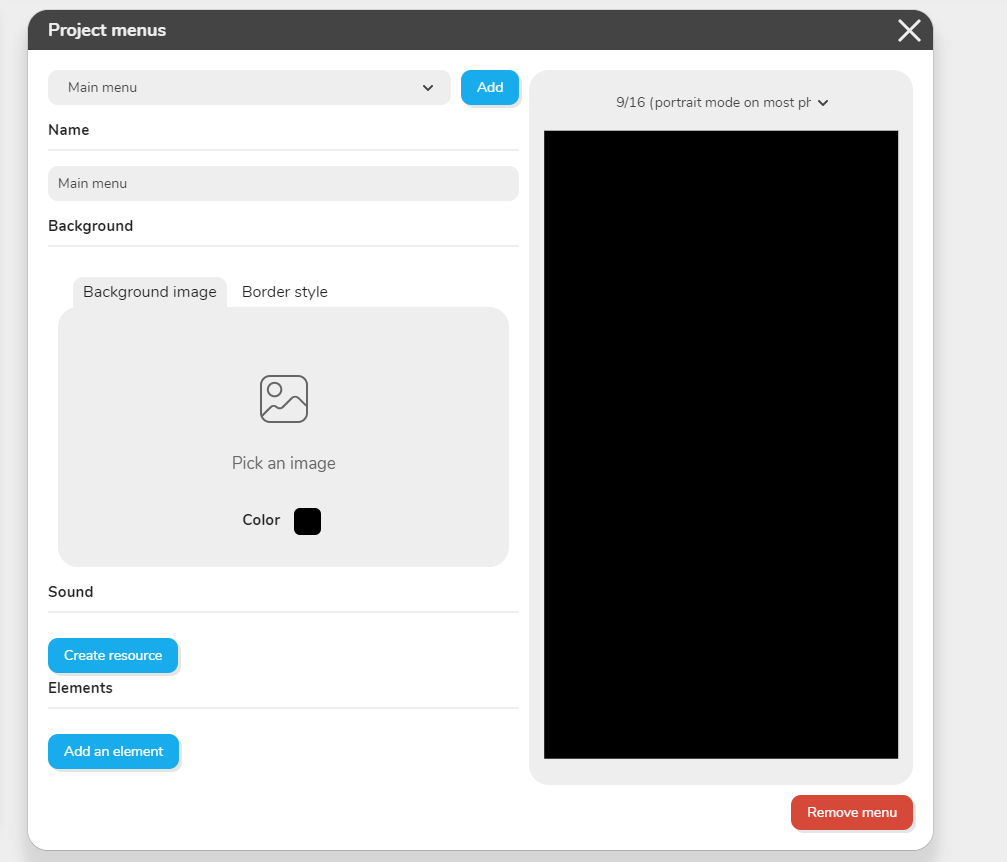 There are 3 types of menus:

The most common menu. It is activated as soon as the application is launched, and allows you to add as many pages as you want, while allowing you to launch custom path modules (which will create data) in the form of a tree structure.

The Head Up Display allows you to display an interface of elements at the top of the screen, including buttons, icons and variables (such as scores or completion rate) to give constant feedback to the user.

The overlay menu will be placed on top of a personalized course. This is particularly useful for pausing the experience, adjusting parameters or returning to the main menu or displaying help for example.

For the name of the menu, you can change the default name to main menu.

For the background of the menu, there can be either a background image (and without image a plain color by default).

There can also be a Border Style in the background (which corresponds to a style you can create by going to Main Menu/Styles, which can also be used in tooltips or speech bubbles).

For the menu sound, by clicking on Add a resource, you can choose a background sound that will be played automatically when you get to the menu in question.

The sound (mp3) must first be uploaded to the Project Files.

The elements you can layout are: 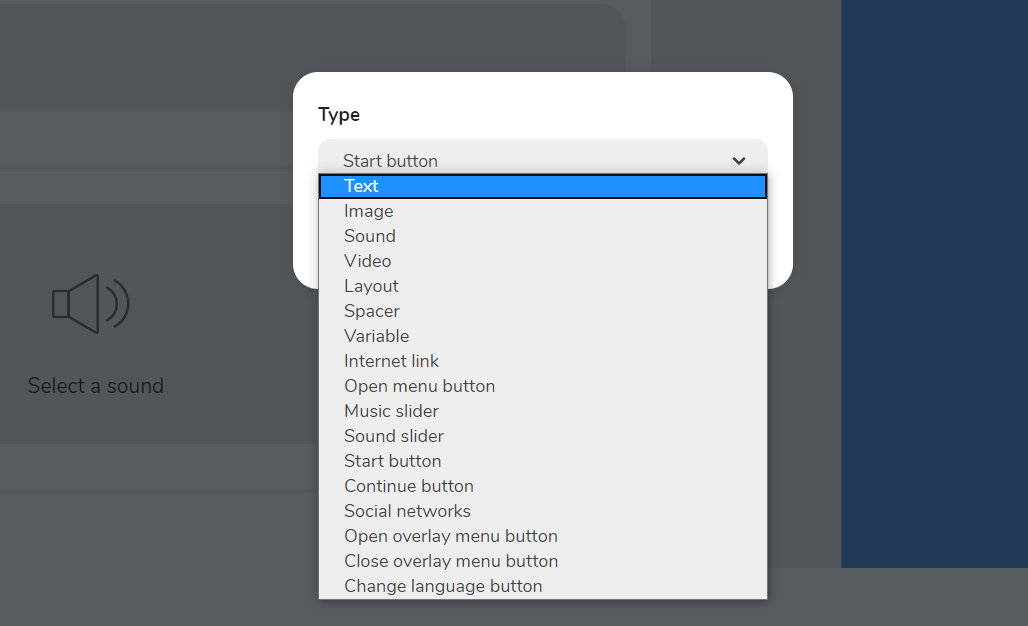 Elements share functionality when you open their edit window:

Open an edit window by clicking on the pen, the element edit symbol

Alignment of the element is only useful if your element is present in a layout, which is a sub-menu: it represents the ability to align your element from your reading direction (left in most languages) to the end of the layout (and therefore right-aligned generally, inversely if your language reads from right to left), center it, or stretch it.

More information on CSS alignment for the curious via this link.

The alignment of the text for example is done directly in the part where you write the text.

Appearance of the element allows you to add a background to it, especially if it is a button, from which you can customize the border (via a predefined style or created by you from the Styles menu) or select it via an image in your project files.

Change very precisely the appearance of your element by activating the custom CSS option in the Advanced Configuration category. 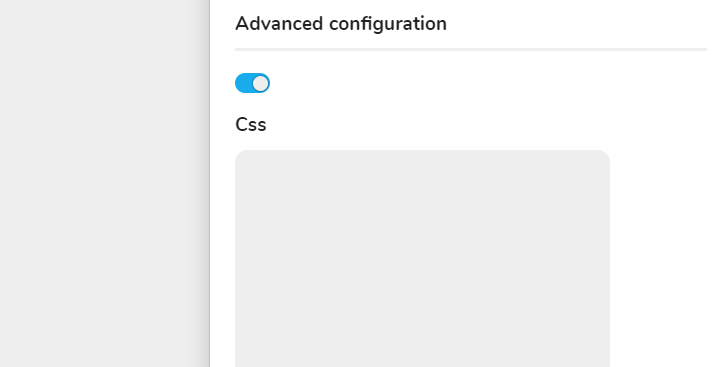 Some details specific to the editing windows of the different elements:

The editing window opens, allowing you to change the content of the text... 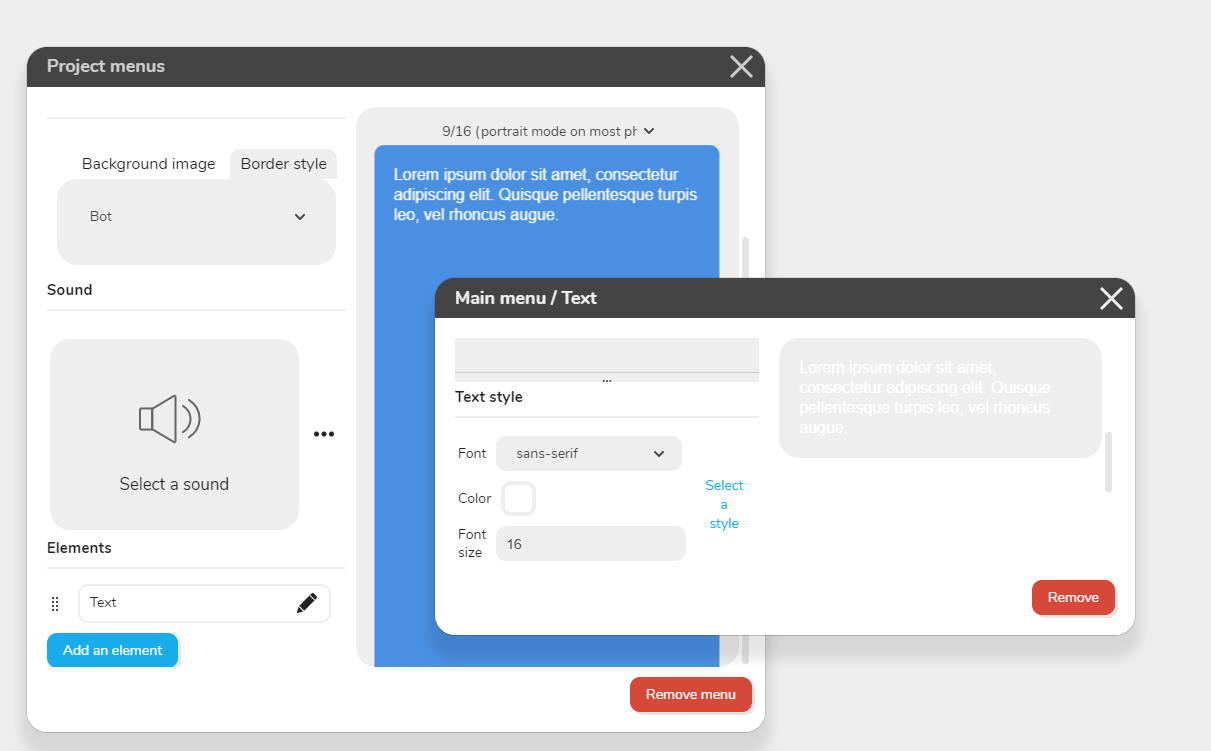 Its appearance like its font (you can add your own in the Styles menu), its color or its size. 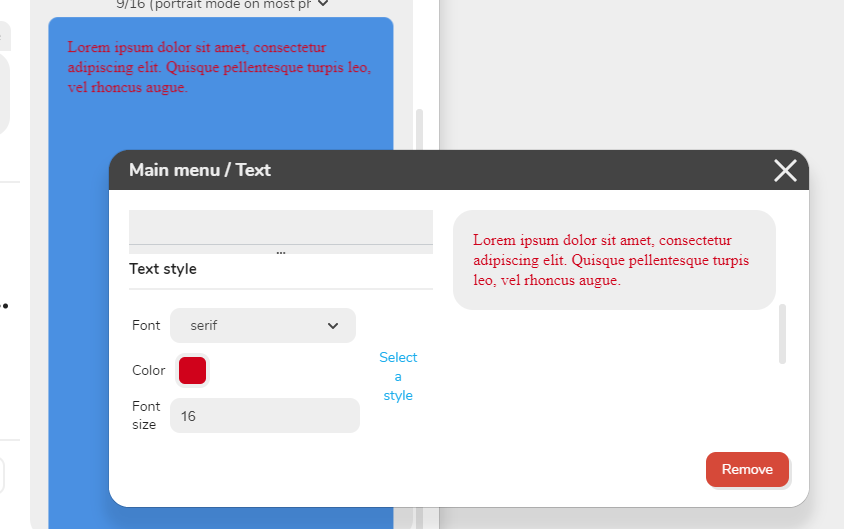 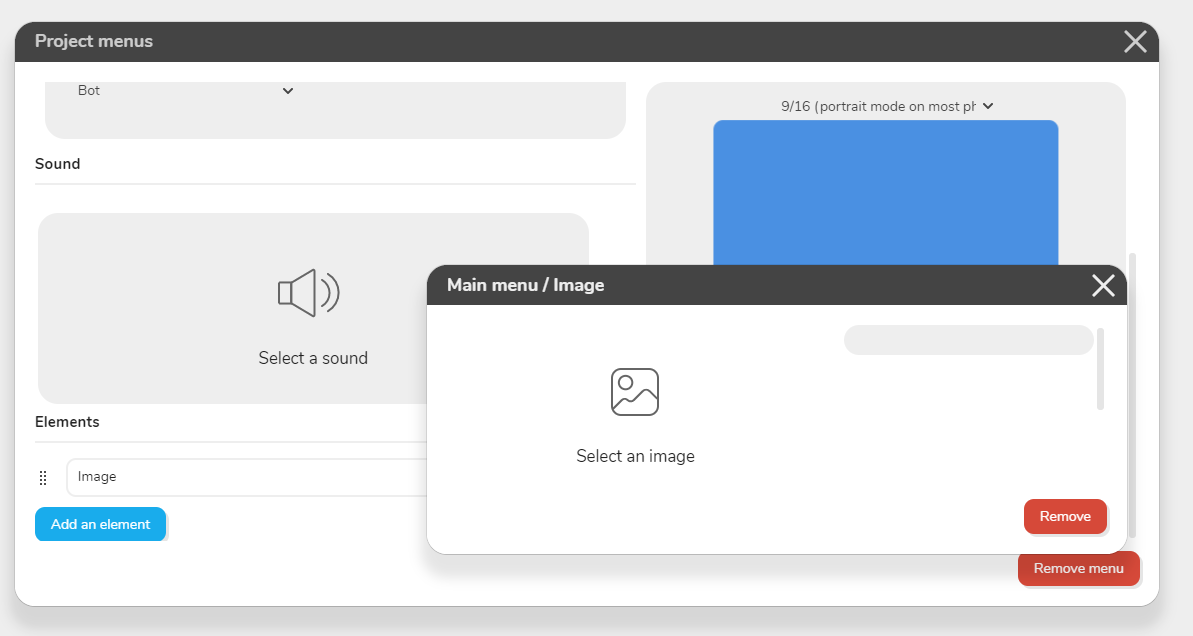 ... to choose from your project files. Then click OK. 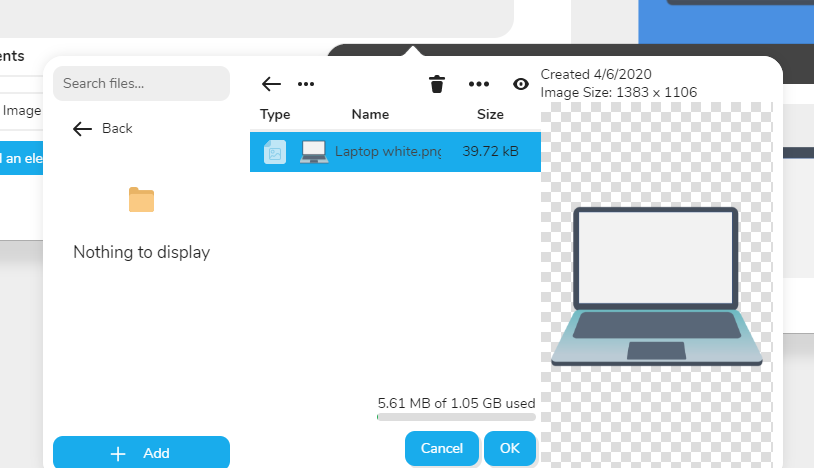 The image is previewed in the editing window of the item as well as in the viewing area of the full menu. 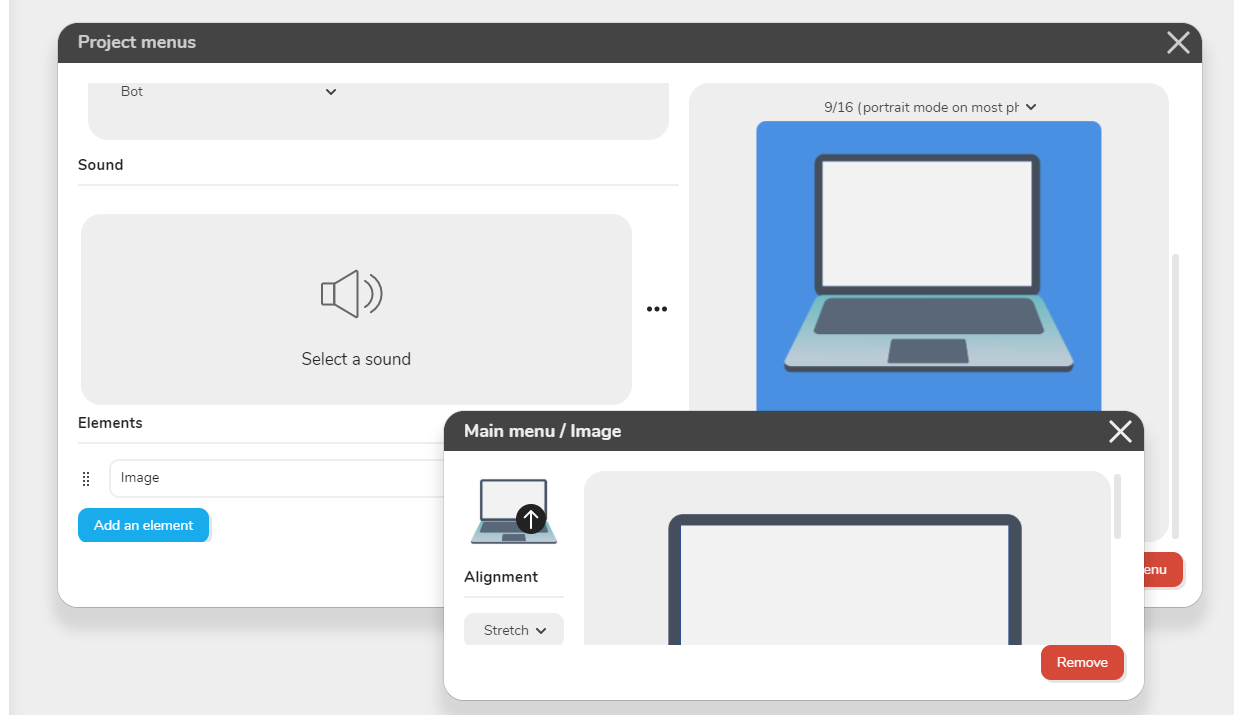 You can then close the image editing window. 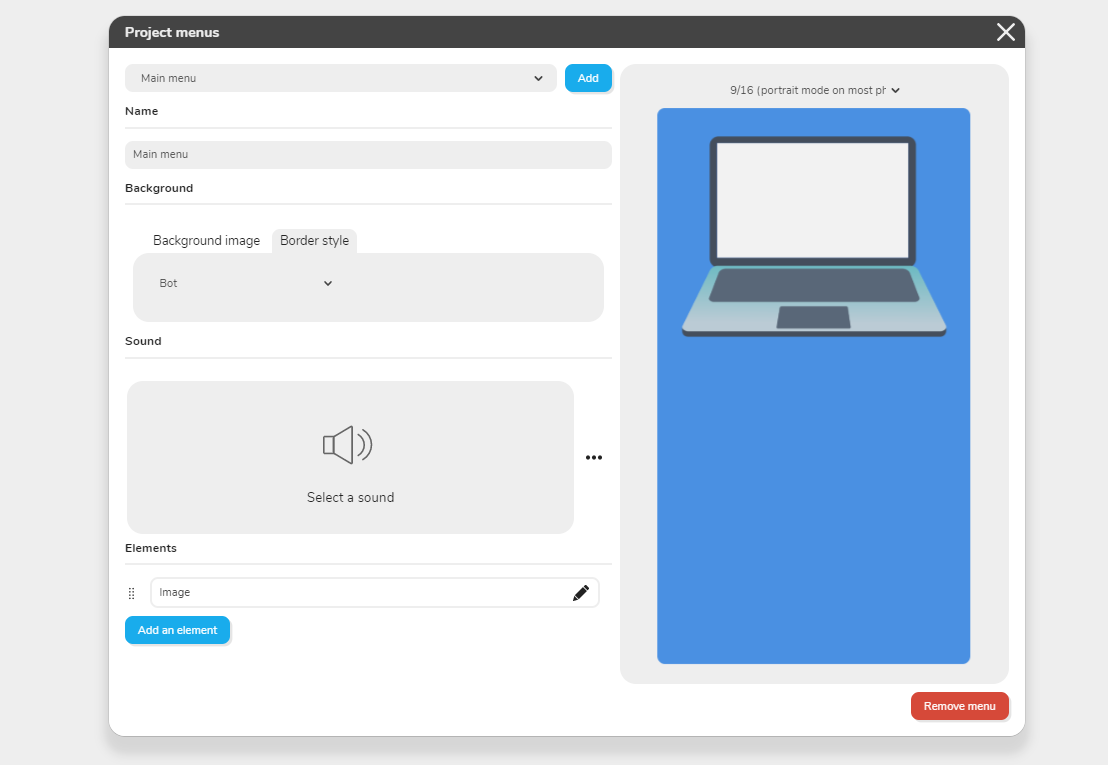 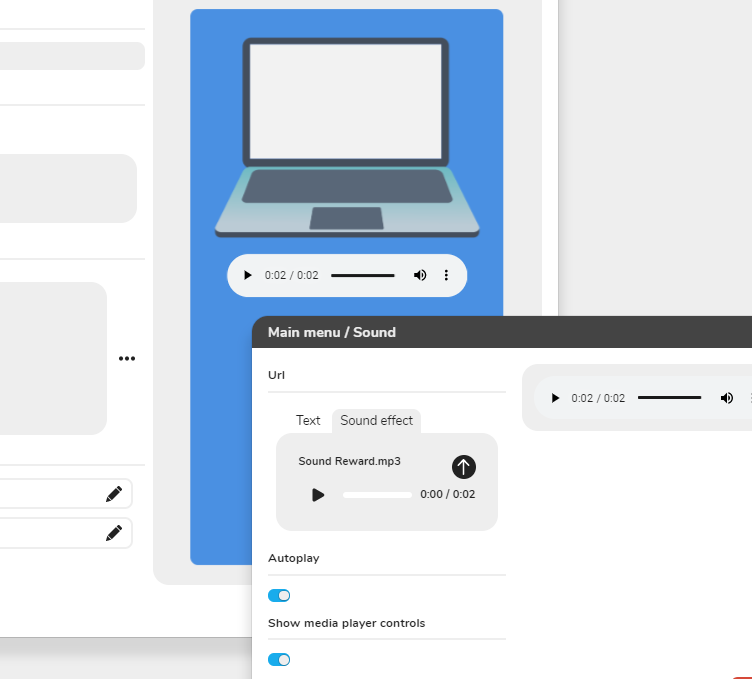 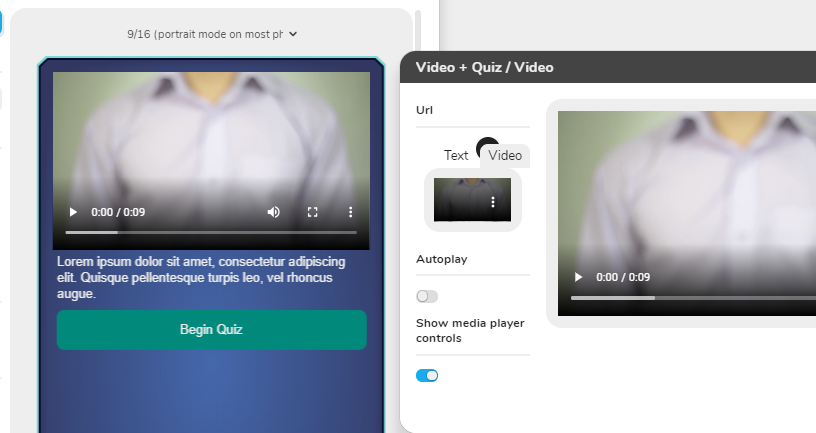 By clicking on the edit icon of a Layout item, i.e. a sub-menu, the Layout item edit window appears and allows you to create the items of this sub-menu, which are the same as those of a custom menu.

Let's create 3 Text elements for example, each containing an emoji.

The Spacer element edit window gives you an option to take up all available space.

Spacers allow you to create a space to best distribute the other elements in place. It will take up all the space available by default in the avaibility limit of the app.

If you change the spacers order, it changes the layout of the items in the menu view, by "pushing" here the Layout item.

Note: You can also uncheck the option Take all available space and change the spacing size manually, with for exemple a pixel or percentage scale (learn more on the CSS scales here). 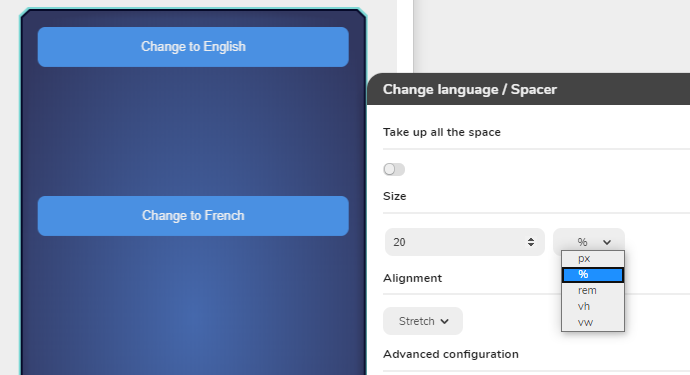 In the edit window of the variable element, you can input an URL to be embeded in your app.

Don't forget to create a button leading to your previous menu otherwise your user will be stuck on that menu. 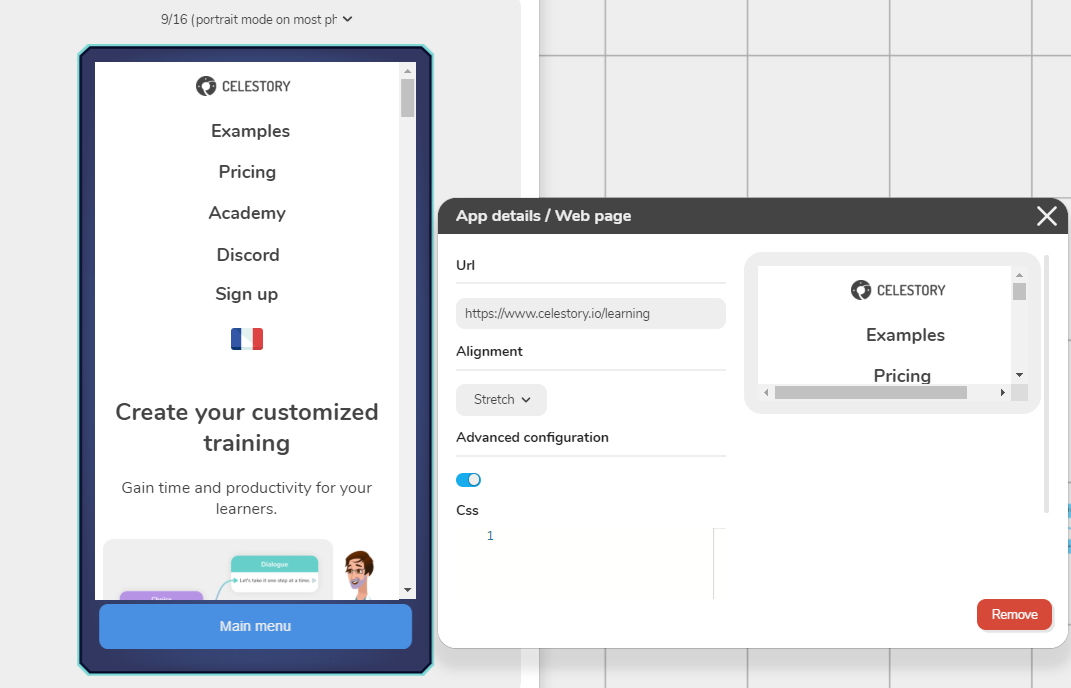 In the edit window of the variable element, you can select one of the project variables.

In the Appearance section, you can customize the background of the variable element.

...its displayed value will change in real time with user interactions in the graph.

Here the initial value is 0 and no session has been started, 0 is displayed.

You can also use the Layout element, which contains a variable to display its value and a text to indicate the score scale to which it is compared.

The direction of the Layout elements can be horizontal or verical.

If you choose a boolean variable, you can set up a contextual image or text regarding if the value if True of False. 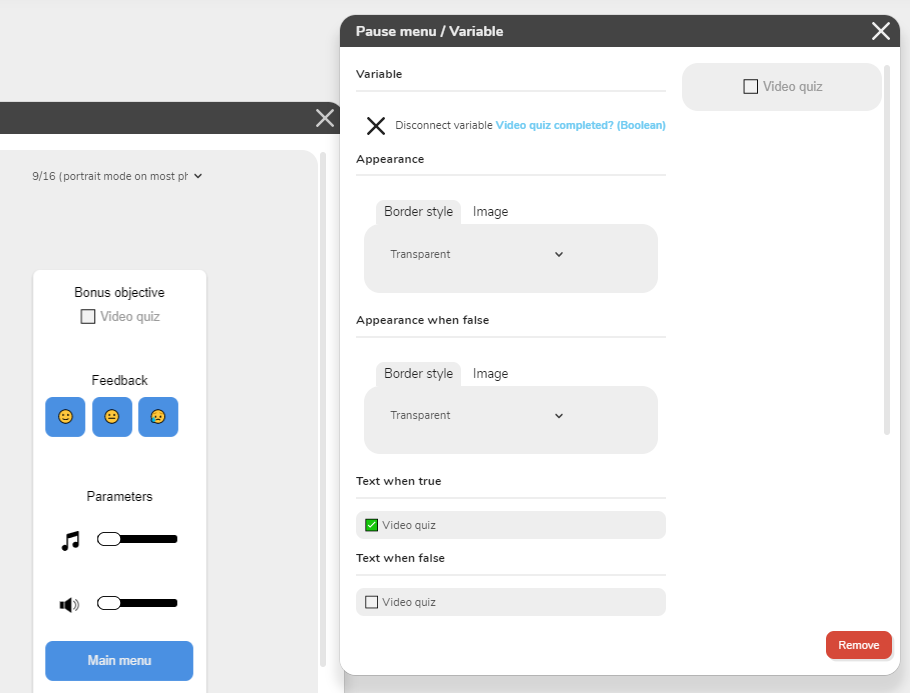 The editing window of the Internet Link element allows you to change the text of the button's link, as well as the link of the URL to which you want it to refer. 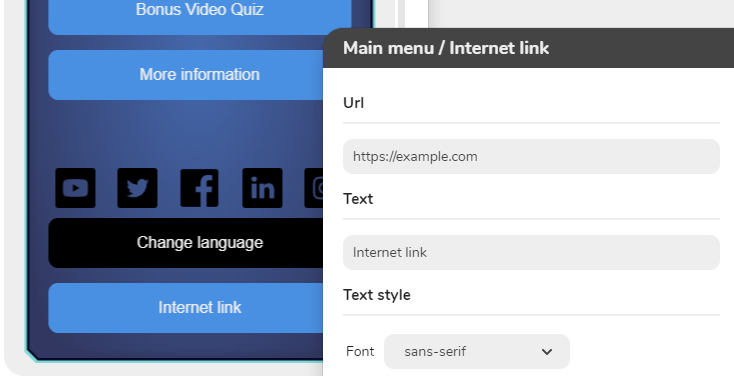 You will be able to create a button that allows you to switch from one custom menu to another.

Please create your target menu first by clicking on the Add button to the right of the menu selection drop-down menu.

You are redirected to the editor of your new menu.

Do not hesitate to rename it to find it more easily.

By returning to the main menu via the menu selection menu, and re-opening the Button item edit window to open a menu, you can define the Menu to be opened by pressing the "More information" button.

You can also change the design of the slider, the background of the element and the appearance of the Slider among the default styles or your own. 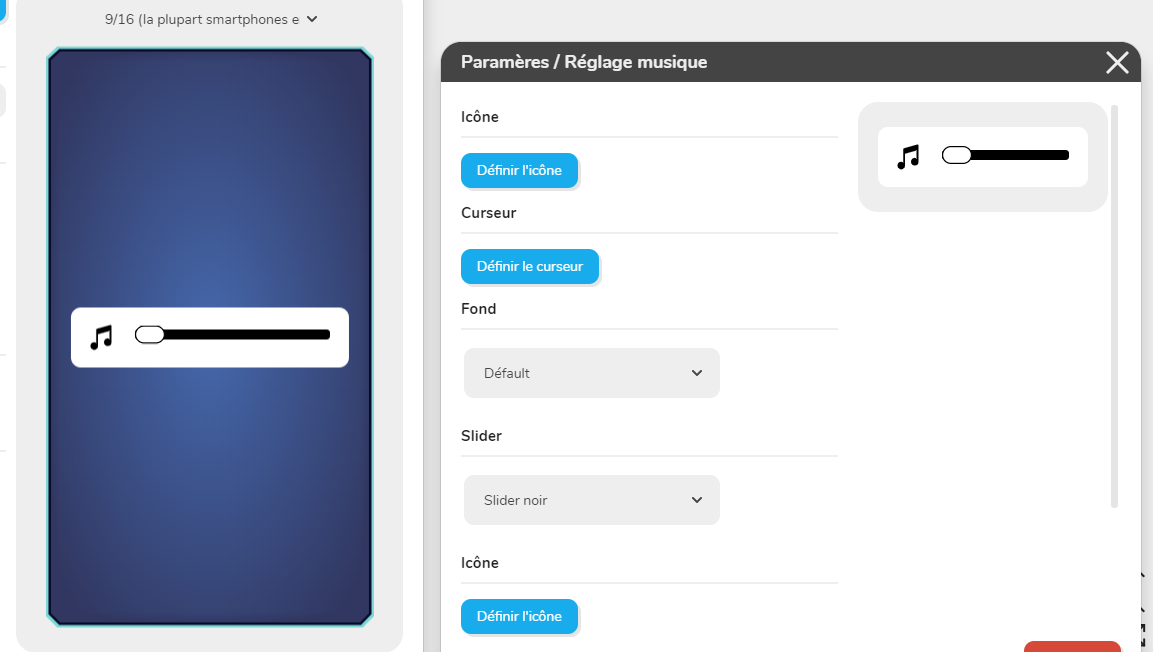 As Music Setting, allows you to configure the volume icon of the sounds played when a menu button is pressed, or a menu during the experiment if the gauge is pressed at that time.

You can also change the design of the slider, the background of the element and the appearance of the Slider among the default styles or your own.

Allows you to redirect the user to one of your modules containing your graphs.

Don't forget to create your modules first by clicking on Add at the bottom left of the side menu.

In the Start Button item's edit window, you can then select the targeted Module, which will first return to its Start Graph (and from there you can make your user reach all the module's subgraphs).

The Reset Variables option is useful when you don't want the history of the user's actions to be taken into account in this new run.

In this window you can change the text of the Continue button as well as its appearance. It will return to the last checkpoint the user passed through and its variable values will be loaded.

More information on the 🟦 Checkpoint article.

Here you can define the links of your social networks, their icons and their size which will be centered to fit in a horizontal space. 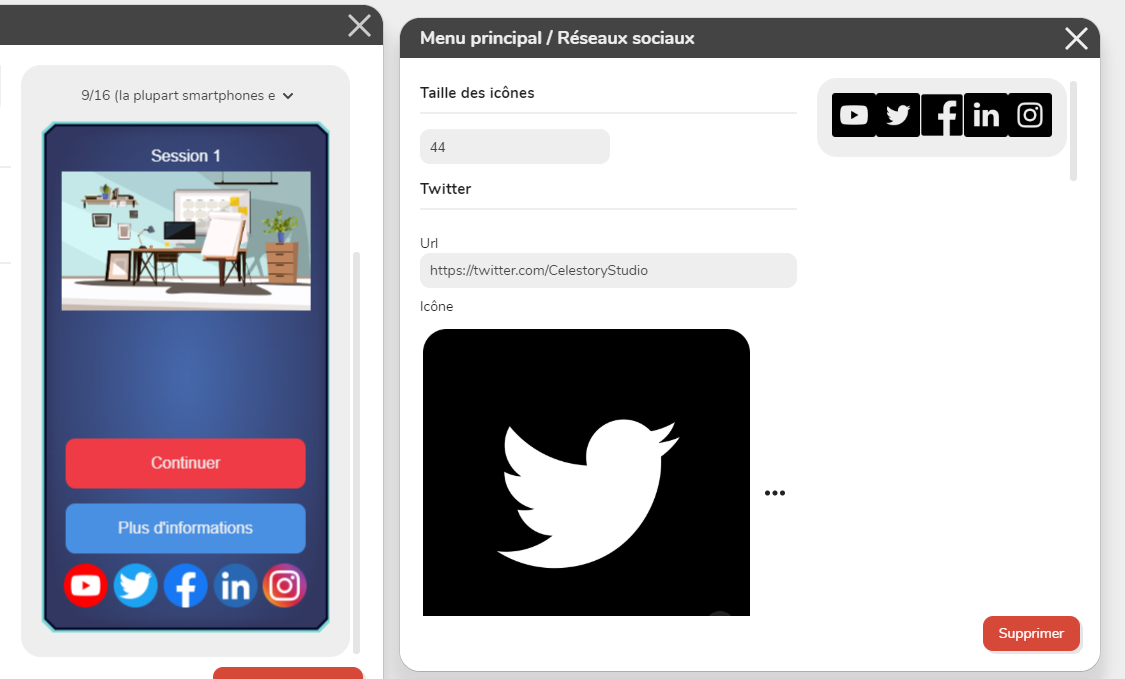 Before creating an Open Overlay Menu Button, you must create an HUD (Head Up Display) menu by clicking Add to the right of the drop-down menu selection.

You automatically switch to editing the HUD Menu, which is a high level user experience menu when it plays the graph of the app.

In the edit window of this one, you can change the button text, its appearance (via a border or an image). 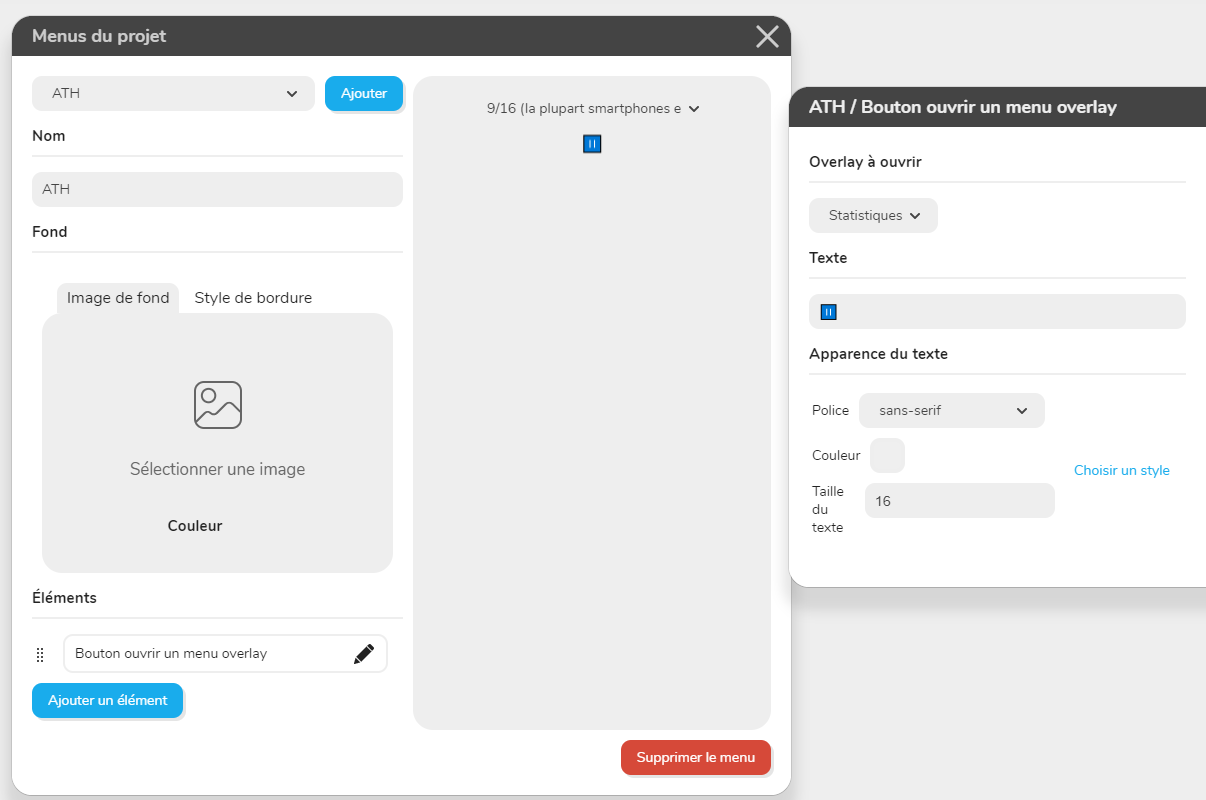 So while the player is playing the graph, he sees a Button he can press to access an overlay menu.

Note: You can even go much further by creating a more advanced HUD interface, for example here with a horonzontal composition of a variable (connected to the numerical variable Score), a Text ("points"), a spacing and a Button open menu overlay.

Then create a Menu overlay by clicking on Add to the right of the drop-down menu selection.

You automatically switch to editing the Menu overlay, which is an overlay menu.

In this example, we call it Statistics.

You can change the border style of the overlay menu, whose border encompasses all elements.

Here, we have created a Layout element (a sub-menu) with 2 elements: variable (which we have connected to the numeric variable Completion) and a text indicating to the user the scale of completion ("/5pages"). 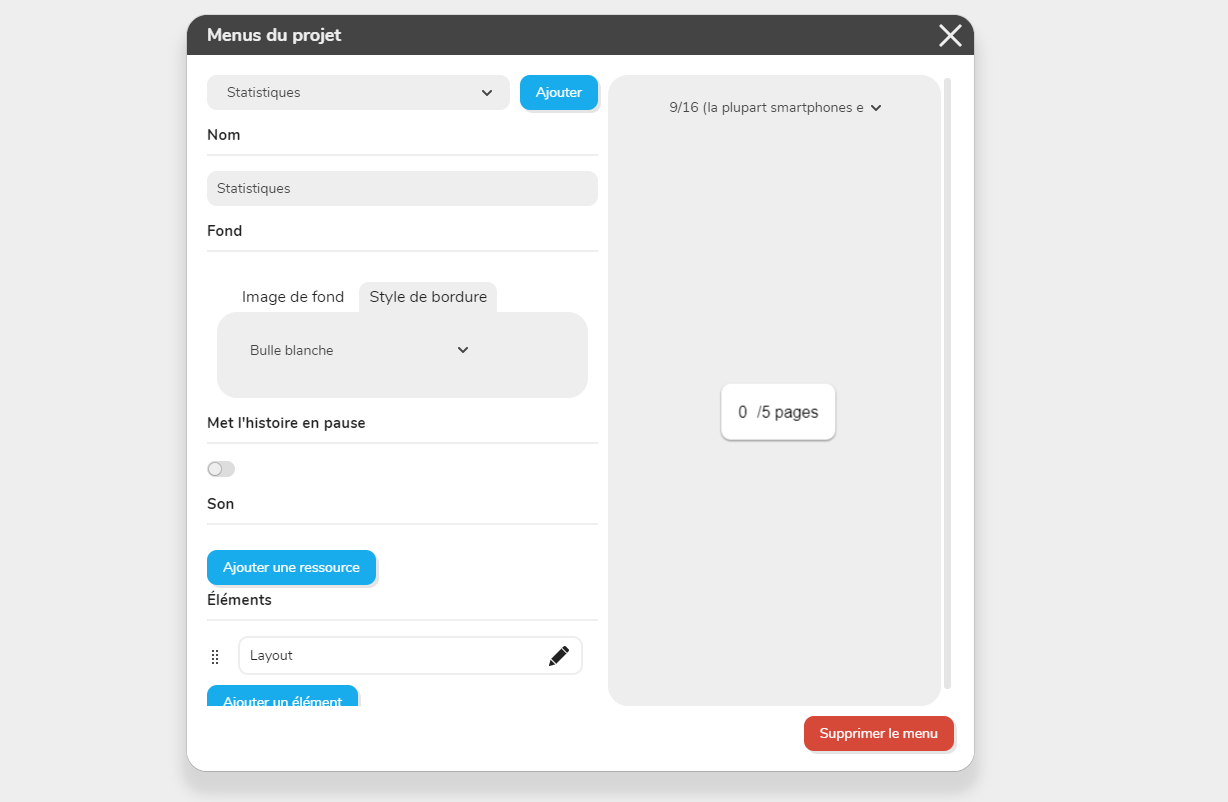 You can also enable the option to Pause the story, which, if the overlay menu is open while the user is playing a graph, will pause the experience. 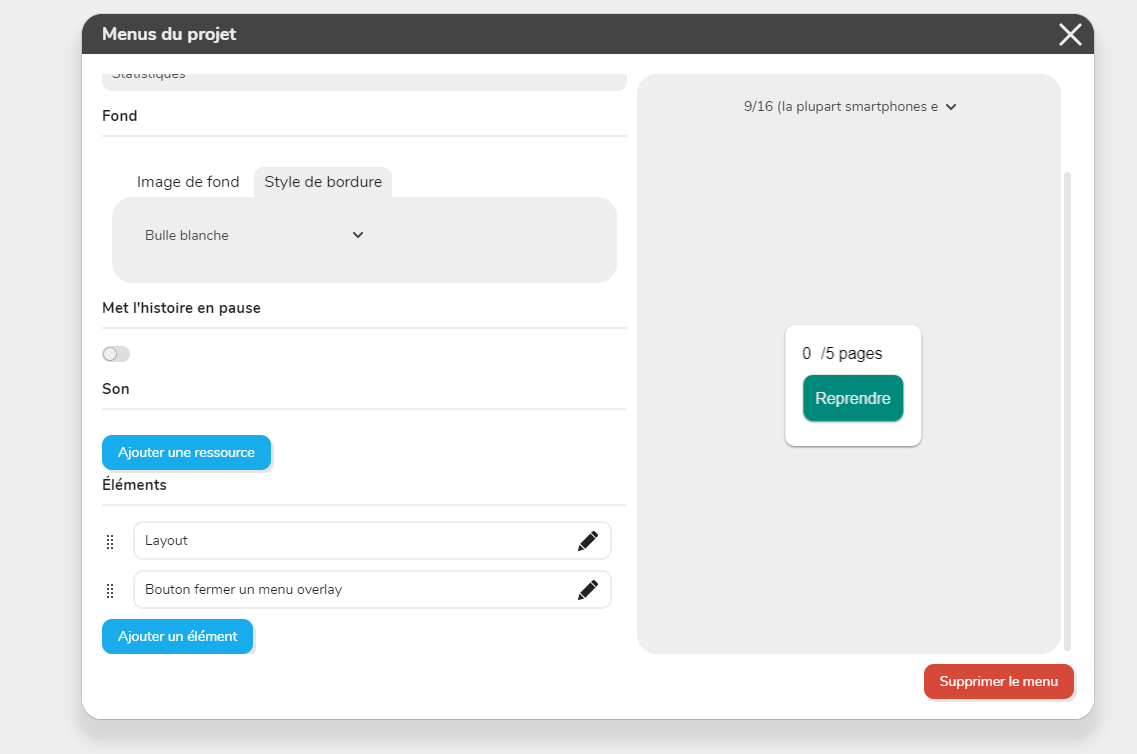 Concretely, when the player plays the graph and clicks on the Open overlay menu Button, he will see the Statistics overlay menu, which he can close at any time. 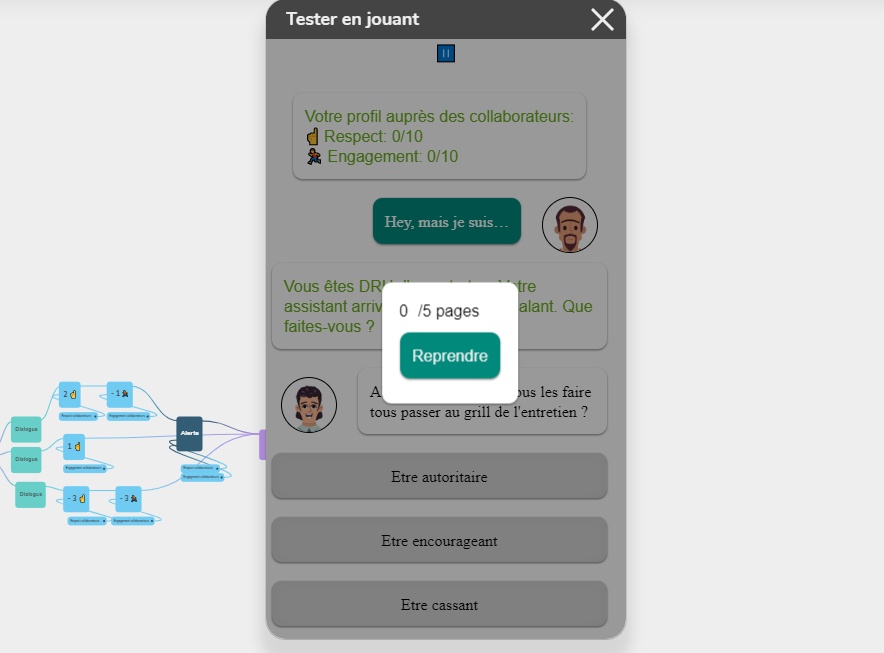 You can create a Button to change language if you have previously imported the translation of your app's texts in the target language, via a po file and the Translate menu (available in the Main Menu).

More information in the section: 🔡 Translating your application

Once done, the edit window of the Button to change language item allows you to choose the language to which the app will be translated, as well as the text of the button. 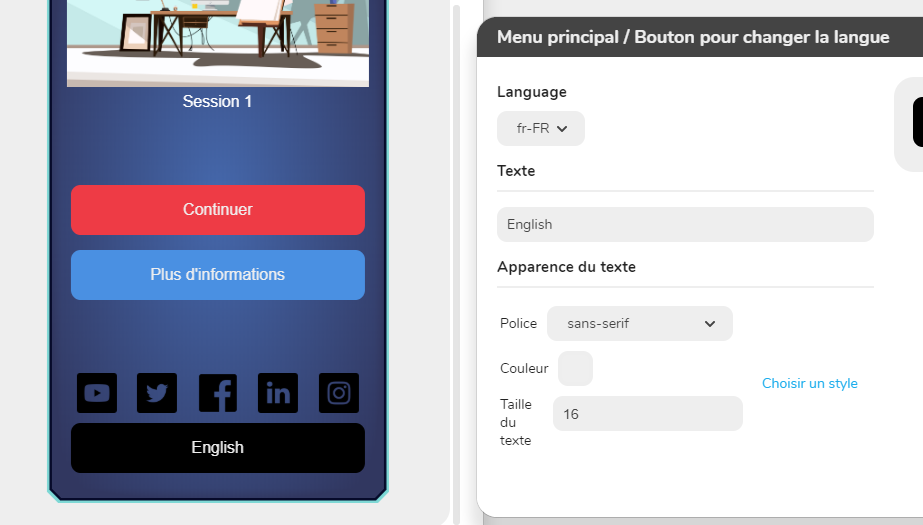 To test the Button, you must Testing playing the application.

If possible, start the test by opening the Main Menu via the drop-down menu at the top of the project, under Play Current Module. 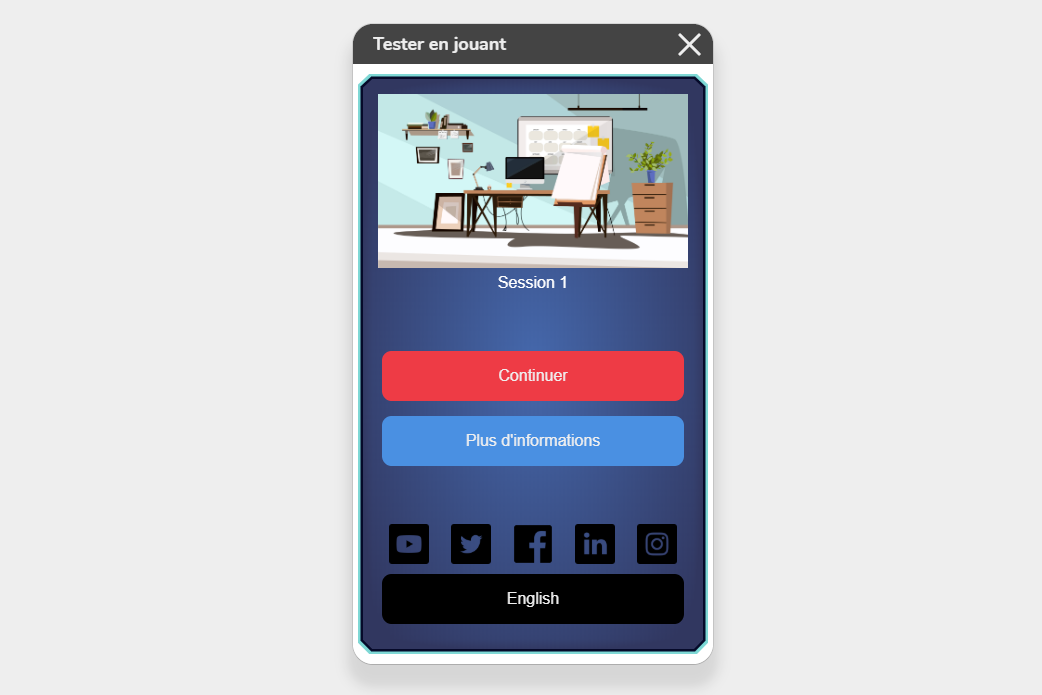 The application then switches to French. 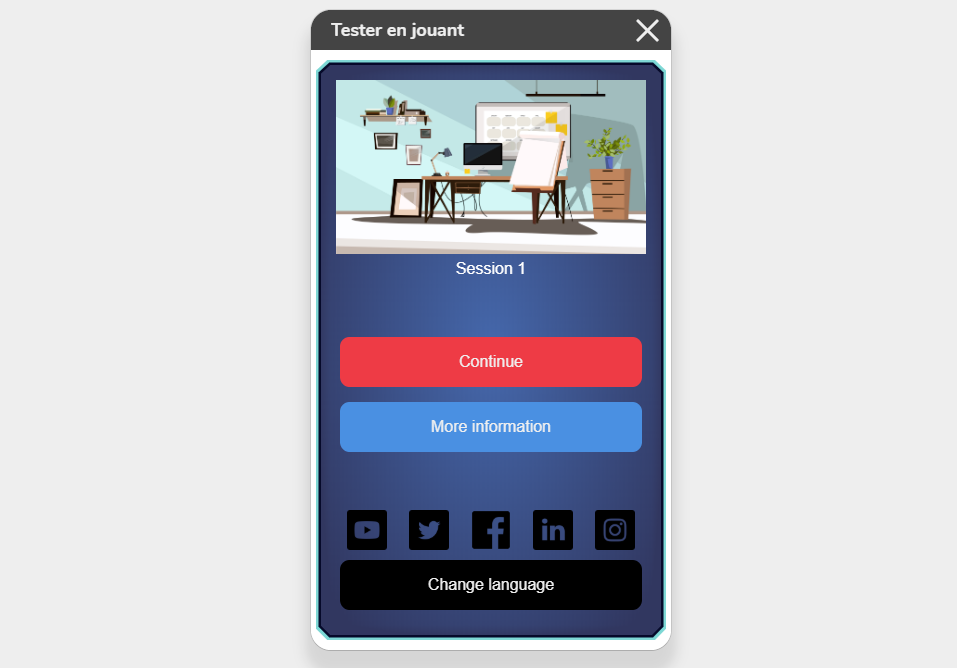 To go back to the original language, or choose another language, don't forget to create as many Buttons to change the language as there are languages.