The interactive presentation allows you to take over the content of your existing presentations without changing the content, but offering a more in-depth exploration of the topics presented.

The advantage of this personalized presentation model is that it can answer 90% of the questions that learners ask you, while allowing you to better measure knowledge acquisition by placing markers as they interact.

A presentation slide (Powerpoint type) is represented by a group of blocks allowing to visualize the media that compose it (text, image, video...).

Let's take an example of a simple math class.

Welcome to this geometry class where we'll solve the age-old problem of how to measure the height of a pyramid without ever climbing it."

You must then assign it an Image block to illustrate the Alert block.

Click on "Add a resource" in the Image block, then on "Choose an image", select the image "Thales principle". 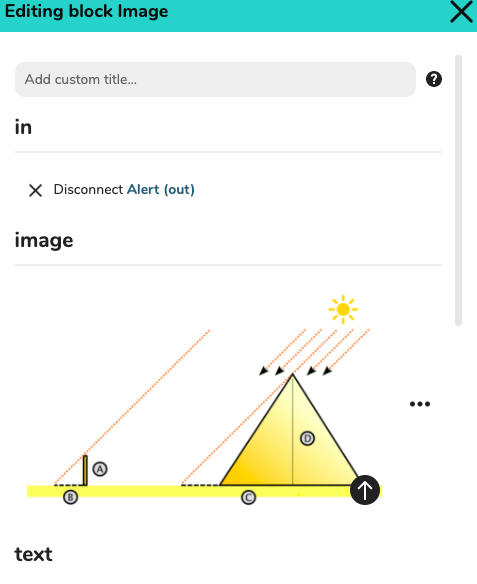 This set of blocks corresponds to Slide 1: Same presentation set.

2. Create the interaction to move to the next Slide

Then create a block Choice: "Next" followed by a block Delete fluid, this allows you to delete the feed, i.e. the visual history of the elements. After this block, the rest of the feed will appear normally and you can create Slide 2.

Slide 2 looks exactly like Slide 1, so you can copy and paste and change the contents of each block afterwards.

The Alert block can for example contain: "The Thales' theorem owes its name to the Greek philosopher, astronomer and mathematician **Thales of Milet** (ca. 600 B.C.). If he is not the "inventor" of this theorem, which was already known to the Babylonians, Thales would have used it to measure the height of the Great Pyramid of Cheops."

Select the image "Thales" in the Image block. 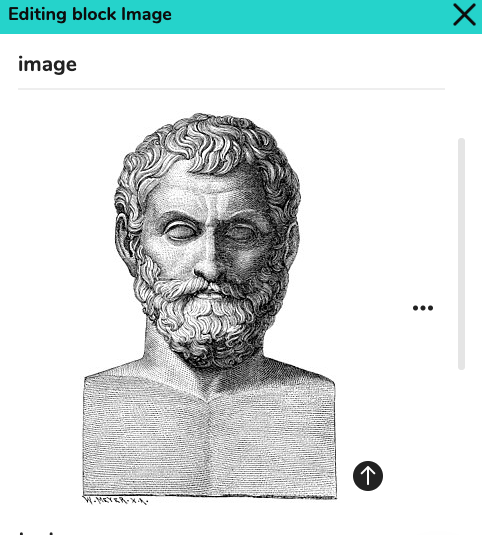 Your second Alert block will then read, "The Thales theorem allows you to calculate distances in a geometric configuration with parallel lines."

4. Offer a choice of deepening or going backwards

Create a Choice block with the following choices: "Previous"; "I have a question" and "Next".

The above choice should be linked to the first Alert block of Slide 1.

2) I have a question

The choice "I have a question" allows you at any time to propose to the learner to ask a question by adding a choice option leading to a detailed part, here the group of blocks Questions Slides 2.

In the Choices block, you will find two questions that students often ask themselves after seeing Slide 2: "What does parallel mean? "and "Who are the Babylonians? ".

In the Alerts block you will find the answers to the questions: "One line is parallel to another if they never touch. "and "Babylonian civilization flourished in South Mesopotamia (now the Middle East) from the beginning of the second millennium BC to the beginning of our era. ".

5. Model what a question from a learner says.

Each question can increase a score modeled here by a numerical variable.

1) Go to the menu, then to Variable

3) Give a name to your variables:

"Curiosity" with no initial value

And "Assimilation of the previous program" with the initial value of 10. 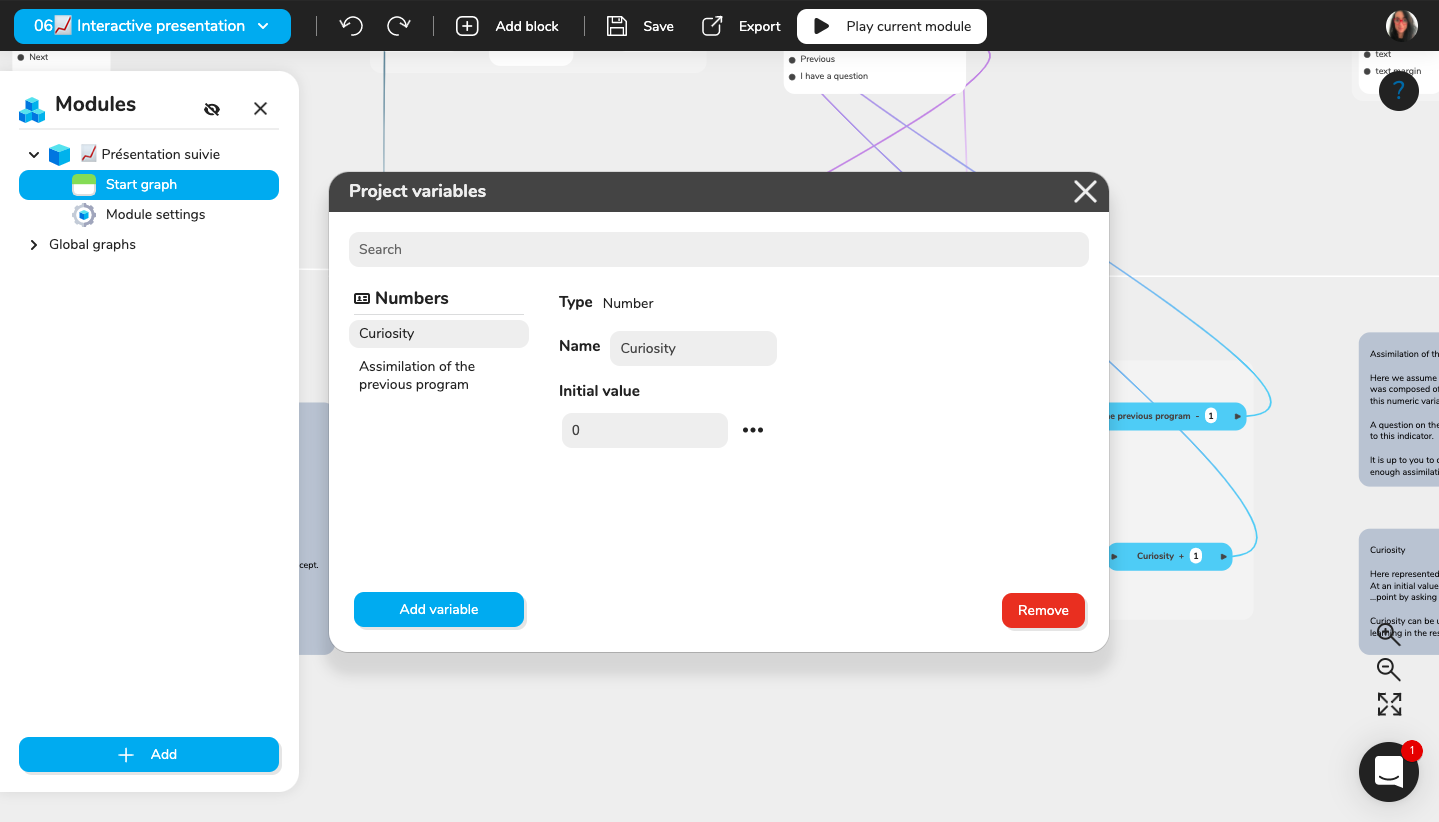 For each Alert block create a Decrement block, allows you to lower the value of a numeric variable by subtracting an integer. This is the combination of an Expression and Assignment block.

You must therefore assign the corresponding variable to each Decrement block.

For the Decrement block assigned to the variable "Assimilation from previous program", we assume that the previous program consisted of 10 points (hence the initial value of 10).

A question on the notion "parallel" will remove 1 point from this indicator. It is up to you to determine what will happen if enough assimilation points are lost.

For the Decrement block assigned to the variable "Curiosity", represented as a numerical variable with an initial value of 0, curiosity is increased by 1

...point by asking a question about the Babylonians.

Curiosity can be used to better immerse a learner in the rest of the course for example.

These two Decrementation blocks must then be linked to the Choice block that follows Slide 2 in order to reproduce the same interactions.

6. Repeat the process to transpose all your slides.

At the end of the graph, create a block 🟦 Open a menu to return to the main menu.

To learn more about how to create a Menu you can consult: 📑 Create menu & pages 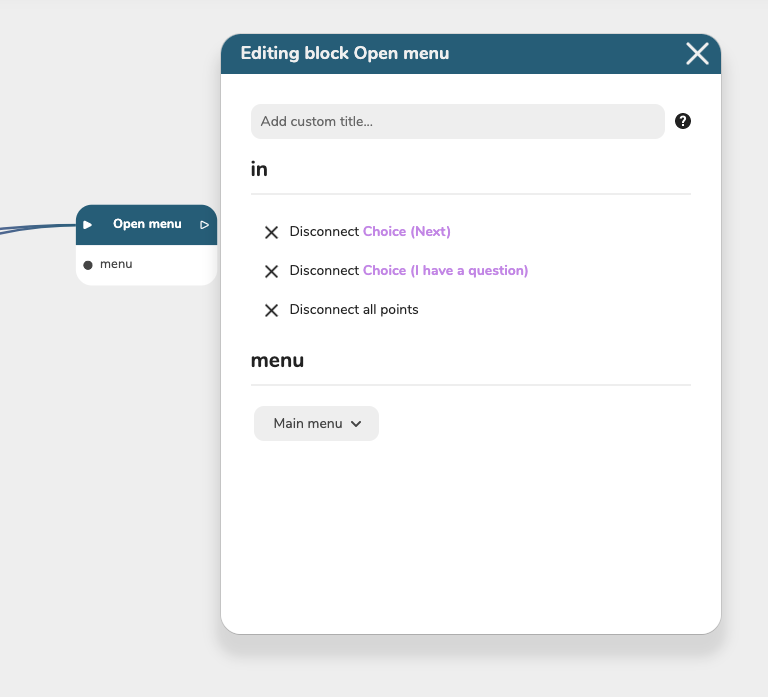 To analyse your learners' behaviour, go to: 📊 Create analytics